To share your memory on the wall of Lewis Meriwether, sign in using one of the following options:

Lewis quietly embodied the noble virtues of a modern Renaissance man. He was an accomplished chemist, inventor, scholar, investor, singer, world-traveller, devoted husband, and wise patriarch to a large and successful family.

Lewis then embarked on a long and celebrated career as a chemist and inventor with the American Cyanamid Company in Stamford, CT. During his nearly thirty years at American Cyanamid, he played a critical role in the discovery, research, and application of many chemicals and was granted numerous patents. Following his retirement from chemistry, Lewis joined a prominent real estate investment firm in Westport, CT, where he worked for thirty more years.

Lewis’ vast interests extended far beyond his professional achievements. He sang as a tenor in several musical groups, including nearly forty years with the Fairfield County Chorale. He was a voracious reader of classical literature and could identify musical symphonies and composers simply by hearing introductory notes. Lewis was a skilled chess player and imparted his love for the game to his children and grandchildren. He also frequented the Metropolitan Opera in New York City, played the harpsichord, and collected priceless art pieces and rare books. Nonetheless, like a true Renaissance man, he was also a keen handyman who could fix a broken washing machine or repair a car as easily as he could checkmate an unprotected king.

However, of all his innumerable life accomplishments, Lewis was most proud of his marriage to Nahid Farbod Meriwether, the love of his life, whom he wed in 1953. Lewis and Nahid traversed the globe together, visiting forty-eight countries and accumulating adventures, stories, and antiquities from every corner of the world. Over their nearly sixty-eight years of marriage, the couple made a happy home in Westport, raised three successful children, and provided immeasurable love, guidance, and wisdom to new generations of the family for decades. Lewis loved Nahid as much as a man could love anything, and their union was the greatest jewel in his long and wonderful life.

We encourage you to share your most beloved memories of Lewis here, so that the family and other loved ones can always see it. You can upload cherished photographs, or share your favorite stories, and can even comment on those shared by others.

Plant a Tree in Memory of Lewis
Plant a tree 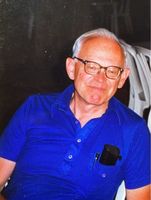